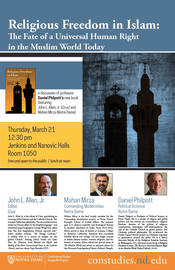 Discussion will begin at 12:30 in room 1050 of Jenkins and Nanovic Halls

John L. Allen Jr. is the editor of Crux, specializing in coverage of the Vatican and the Catholic Church. He has written eleven books on the Vatican and Catholic affairs, and also is a popular speaker on Catholicism both in the United States and internationally. The London Tablet has called John “the most authoritative writer on Vatican affairs in the English language,” and renowned papal biographer George Weigel has called him “the best Anglophone Vatican reporter ever.” John’s weekly column, “All Things Catholic,” is widely read as a source of insight on the global Church. Among John’s books are “Opus Dei: An Objective Look Behind the Myths and Reality of the Most Controversial Force in the Catholic Church”, and two about Pope Benedict XVI. He is a senior Vatican analyst for CNN, and was a correspondent for the National Catholic Reporter for 16 years. He has received honorary doctorates from the University of St. Michael’s College in Toronto, Ontario; Lewis University in Romeoville, Ill.; St. Michael’s College in Colchester, Vt.; and the University of Dallas, Dallas, Texas.

Mahan Mirza is the lead faculty member for the Contending Modernities project, funded by the Templeton Foundation, at Notre Dame’s Keough’s School of Global Affairs. The project’s goal is to advance scientific and theological literacy in madrasa discourses in India. From 2013-2016, Mirza served as dean of faculty at Zaytuna College in Berkeley, California, America’s first accredited Muslim liberal arts college. He has taught courses in Arabic-Islamic studies, western religions, and the history of science, along with foundational subjects in the liberal arts including logic, rhetoric, law, astronomy, ethics, and politics to students at California State-Chico and Yale. Mirza edited two special issues of The Muslim World and served as assistant editor for the Princeton Encyclopedia of Islamic Political Thought.