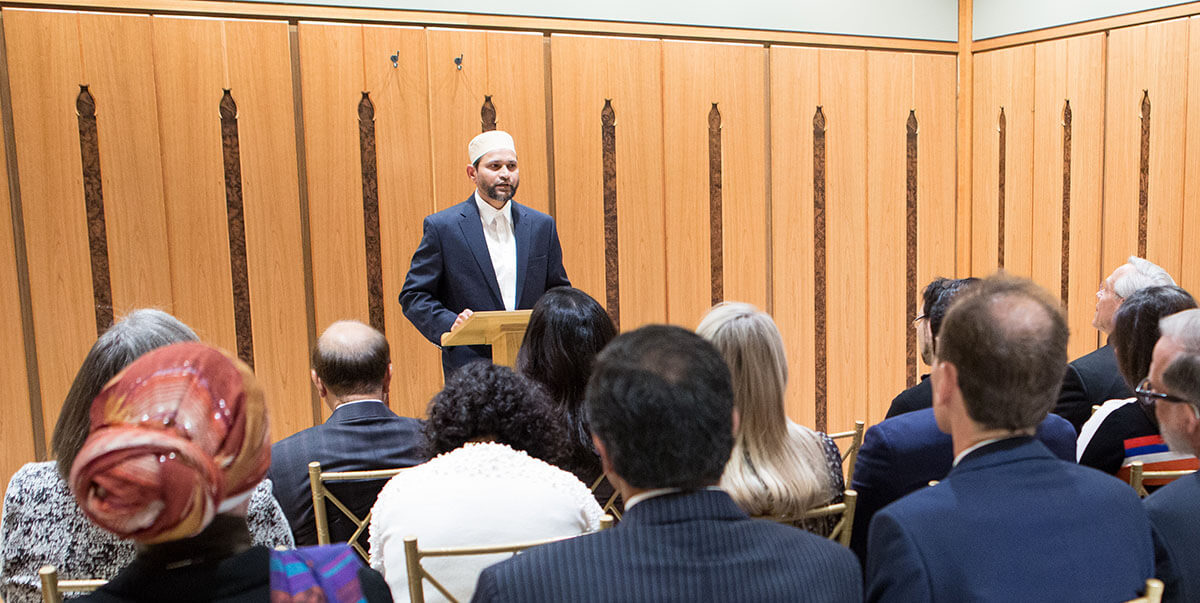 Mohammad Sirajuddin, imam of the Islamic Society of Michiana, speaks at the interfaith prayer service for the launch of the Ansari Institute for Global Engagement with Religion.

The official launch of the Ansari Institute for Global Engagement with Religion started with prayers and blessings from different faith traditions.

Imam Mohammad Sirajuddin of the Islamic Society of Michiana shared words from chapter 96 of the Quran that encourage the furthering of human knowledge: “Read! Your Lord is the Most Gracious, Who taught by the pen, Taught the human being what he knew not.”

Tzvi Novick, an associate professor of theology who specializes in rabbinic law and liturgy, prayed the institute would summon our divinely endowed “ability to see in the Other a fellow creature of God.”

The Rev. John Jenkins, C.S.C., president of the University of Notre Dame, prayed for the institute to be a “catalyst for honest conversations that deepen understanding and mutual respect among us” and “allow us to grow closer to one another.”

"You have endowed us, too, uniquely, with the capacity for transcendence.  With the ability to see in the Other a fellow creature of God, and to perceive in ourselves an obligation to protect and preserve the world."—Tzvi Novick

The service in the multi-faith prayer room in Jenkins Nanovic Halls on October 25 began two days of inaugural events to celebrate the new institute, which will engage religions from around the world for the greater good. 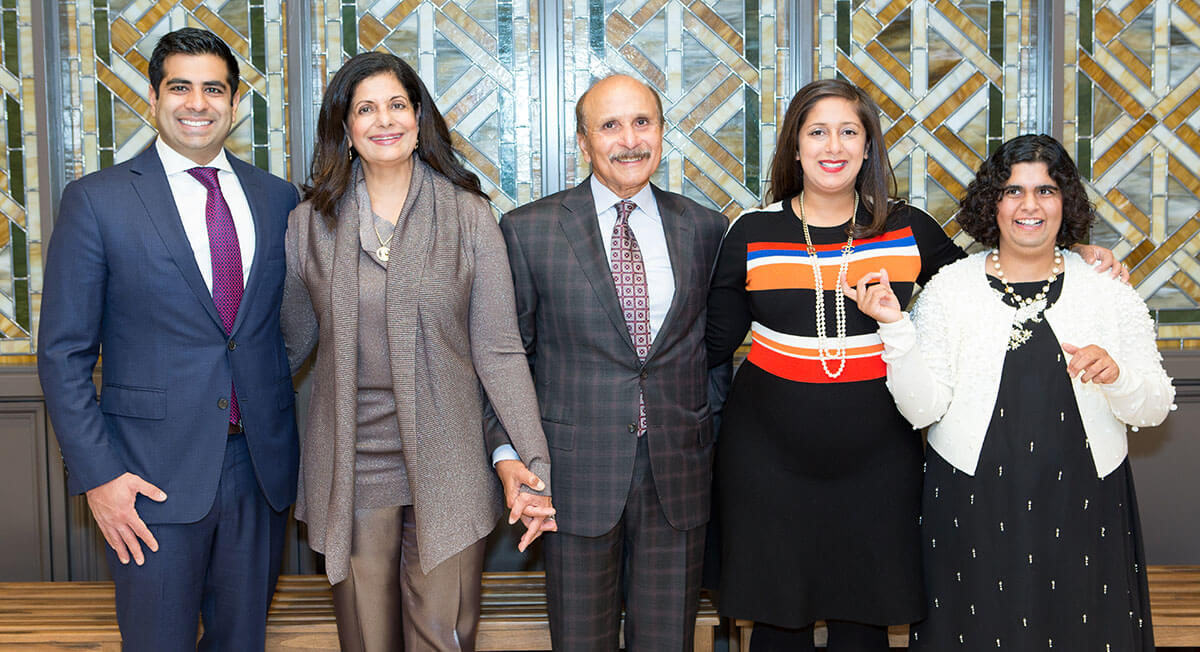 The institute was established through a gift from philanthropists and local physicians Rafat and Zoreen Ansari and their children, Sarah (JD ’09), Adam and Sonya.

In a 2017 New York Times interview, Zoreen Ansari gave this explanation for the family’s generous gift: “We came as immigrants, and this country has given us so much. We want to give something back to America, but also to humanity. We want to promote the idea of equality.”

The Ansari Institute, part of the Keough School of Global Affairs, is dedicated to the study of religion and global affairs. As it grows, the institute aims to serve as a center of public deliberation and education through research, teaching, outreach, and interaction with religious communities worldwide. Institute faculty and global partners will explore how diverse religious traditions can address a variety of contemporary problems, including migration and refugees, climate change and environmental degradation, poverty and economic disparity, and conflict and interreligious strife. 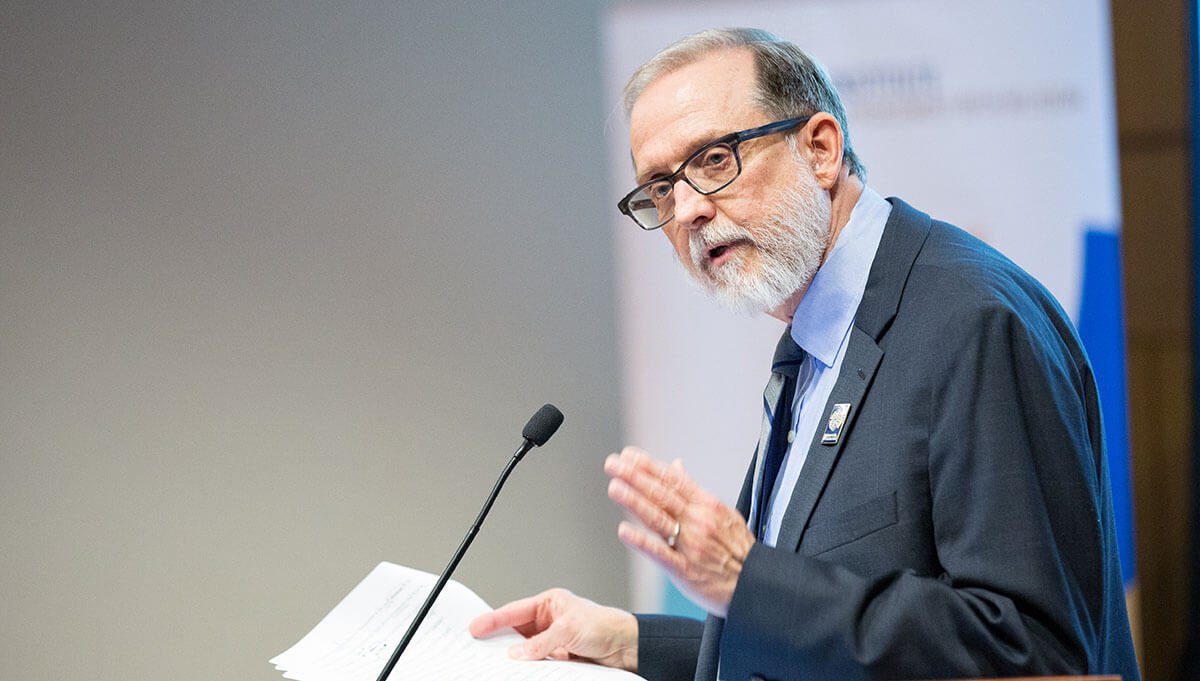 Following the multi-faith prayer service and Jenkins’ blessing of the institute’s office suite on the fourth floor of Jenkins Hall, Ansari Institute founding director Thomas Tweed delivered his inaugural address at the Hesburgh Center for International Studies auditorium and to a capacity crowd.

A scholar of religion and former president of the American Academy of Religion, Tweed presented an eloquent explanation of why religion matters today, in a world that seems both more and less religious.

“All of us who want to be global citizens need to understand religion. It doesn’t matter whether you find it compelling or whether your community seems increasingly secular."—Thomas Tweed

“All of us who want to be global citizens need to understand religion,” he emphasized. “It doesn’t matter whether you find it compelling or whether your community seems increasingly secular.

“What matters is that billions around the world practice a faith—and they act from it. It shapes how they enter the world and how they leave it, how they eat, dress, marry—and raise their children. It shapes their assumptions about who they are and who they want to be.”

Listing some of the most pressing global challenges of the day—displaced refugees, economic disparities, gender inequalities, ethnoreligious nationalisms, artificial intelligence, genetic technologies, and climate change—Tweed emphasized the only way to address them effectively is to engage religious actors in partnership with other entities.

“We are called, then, to understand this important human factor in life today—and in the future,” he said.

With this in mind, Tweed explained the institute will focus on how religion can help address four global issues: migration and displaced people, climate change and environmental degradation, poverty and economic disparity, and religious literacy and inter-religious understanding. 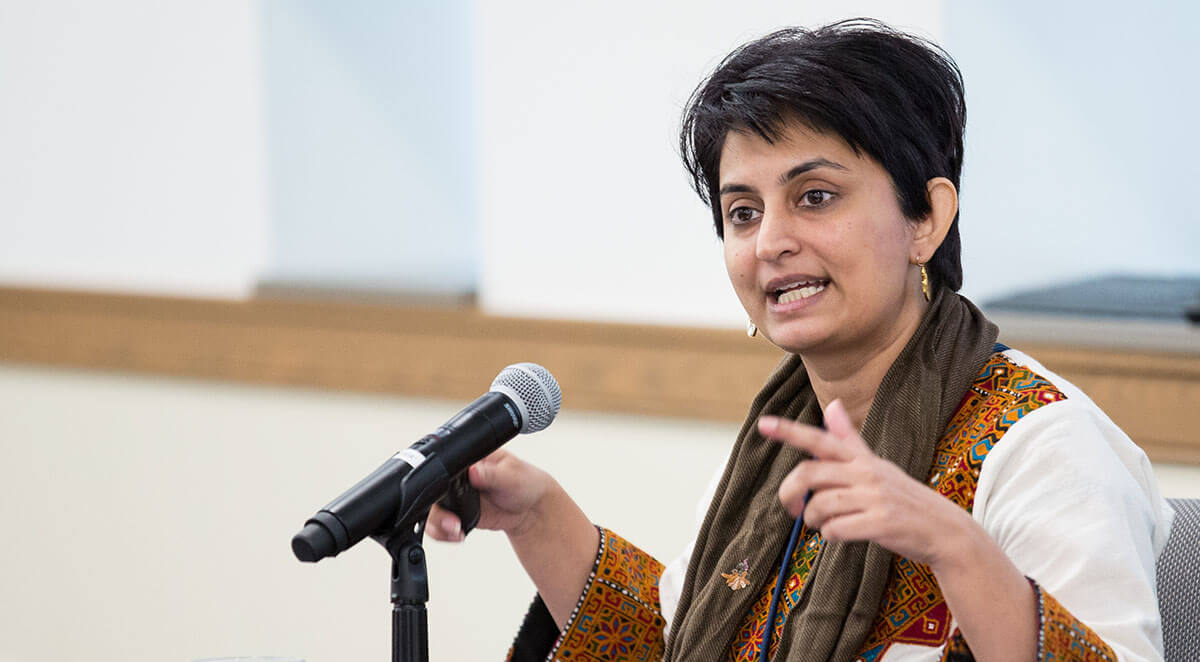 Nosheen Ali, assistant professor for the Institute for Educational Development at The Aga Khan University in Pakistan, answers a question during a panel discussion at the Engaging Religion Conference.

In addition to celebratory events on Oct. 25, which included a banquet after Tweed’s keynote address, the Ansari Institute hosted the Engaging Religion Conference the next day.

Twelve academic experts participated in three panel discussions about timely global challenges that are intertwined with religion: “Forced Migration: How Religion Causes and Eases Displacement, “Religious Misrepresentation: How to Improve Media and Educational Accounts,” and “Sustainable Habitats: How Religions Can Repair Unsustainable Environments.” 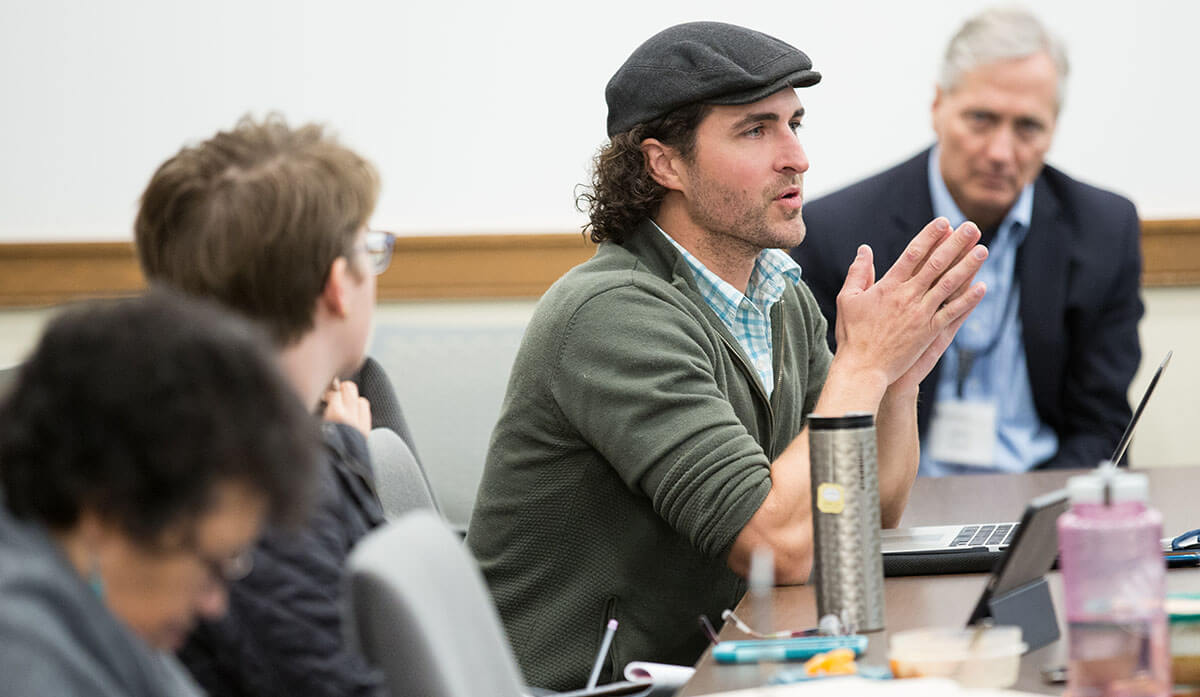 The relevant topics of the conference attracted a wide range of attendees of various ages, faiths, and interests, including students, community members, media representatives, and clergy.

“It was thrilling and humbling to see the enthusiasm for the institute during these two days of inaugural events,” Tweed said. “So many people are invested in our mission and support our next steps. We have important work to do, and I look forward to elevating Notre Dame’s voice in conversations about global religion.”