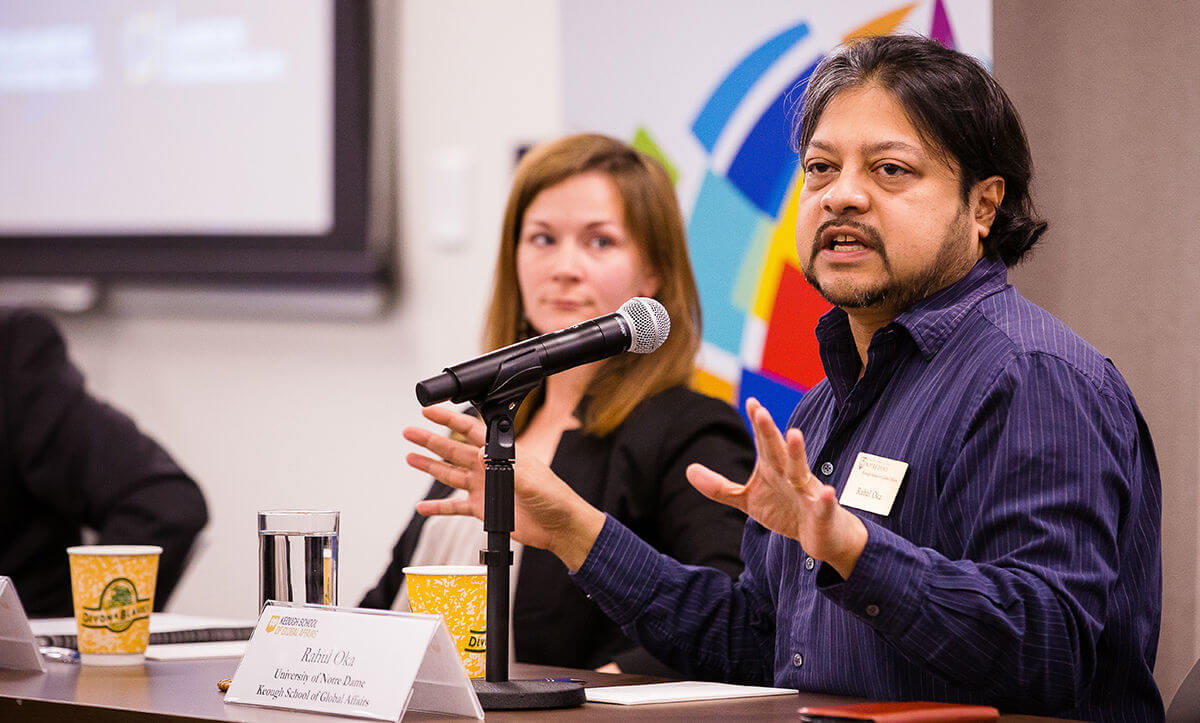 The Notre Dame South Asia Group, a multidisciplinary working group of the Liu Institute, brought together scholars and practitioners at its first conference on May 14 and 15 at the Washington, DC, office of the Keough School of Global Affairs. The theme was “Religion, Public Policy, and Development.”

The first day of the conference featured a series of academic and policy presentations. 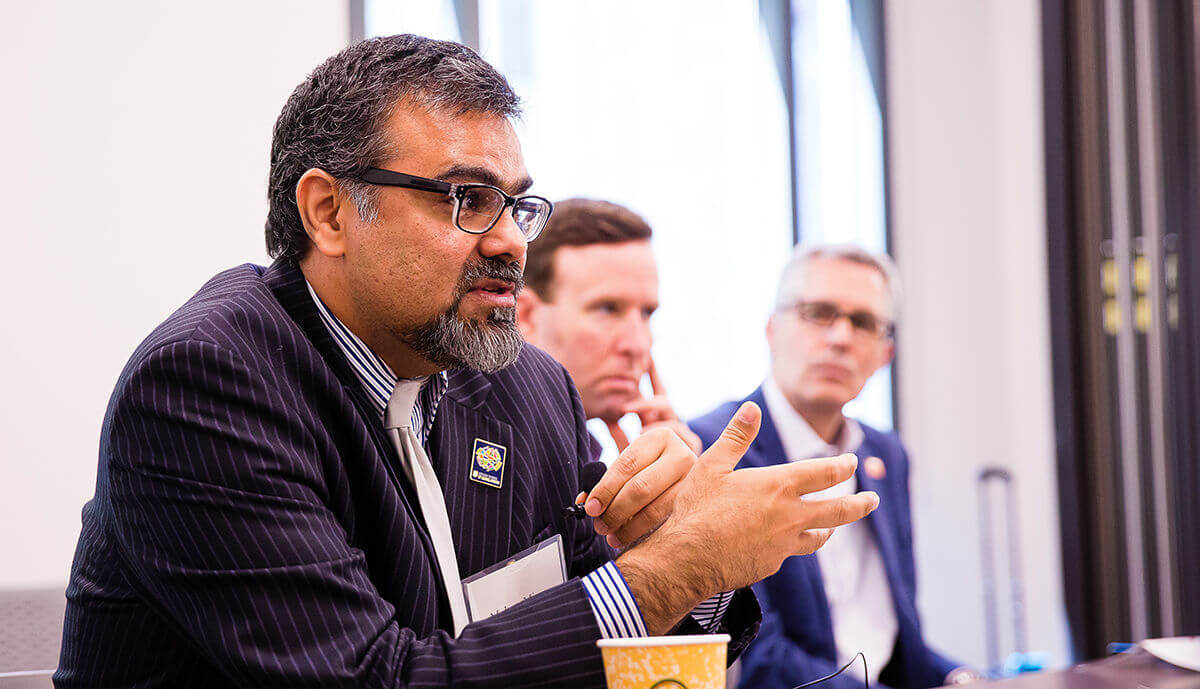 Islamic studies professors Mirza and Moosa presented “Islam, Identity Politics, and Strategies for Madrasa Engagement.” As they explained the role of madrasas in modern education, Mirza and Moosa discussed their Madrasa Discourses project of introducing a greater discussion of scientific and humanistic traditions into madrasa curriculums in South Asia.

Nikhil Menon, a historian at Notre Dame, discussed the “highly unorthodox marriage” between liberal democracy and Soviet-inspired economic planning during India’s first decade of independence in his paper “Holy Men, Worldly Job: Hindu Ascetics and Five Year Plans in Nehruvian India.” While considerable discussion exists about the increasing prominence of religious figures in India’s politics, Menon noted that the government invited religious figures to participate in the outreach and dissemination of the five-year economic plans as early as the 1950s. In making his point, Menon shared a series of political cartoons with the audience and wondered whether outreach by way of religious figures may have provided greater legitimacy to the government’s economic plans while ultimately hindering the establishment of state secularism. 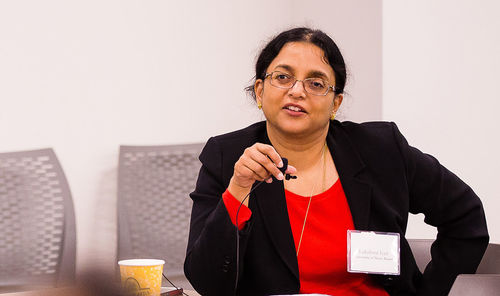 However, unlike other violent crimes such as murders and armed robberies, which have shown a steady decline in India after 1990, religious violence does not show such a steady time trend. Furthermore, states and districts that saw the most violence in the earlier period continue to do so in the later period. Iyer also showed the results of econometric analysis that found rainfall shortages to be only inconsistently associated with rises in religious conflict, suggesting that these events may not be driven purely by economic considerations.

Fernando, an economics professor at Notre Dame, served as the discussant for the presentation “The Dwindling Presence of Religious and Other Minorities from India’s Public Sphere” by Gilles Verniers of Ashoka University.

All presenters received valuable feedback from discussants and the audience of historians, anthropologists, economists, political scientists, and policy professionals from organizations including the World Bank, US State Department, Brookings Institution, Joint Learning Initiative on Faith and Local Communities, and Chatham House. 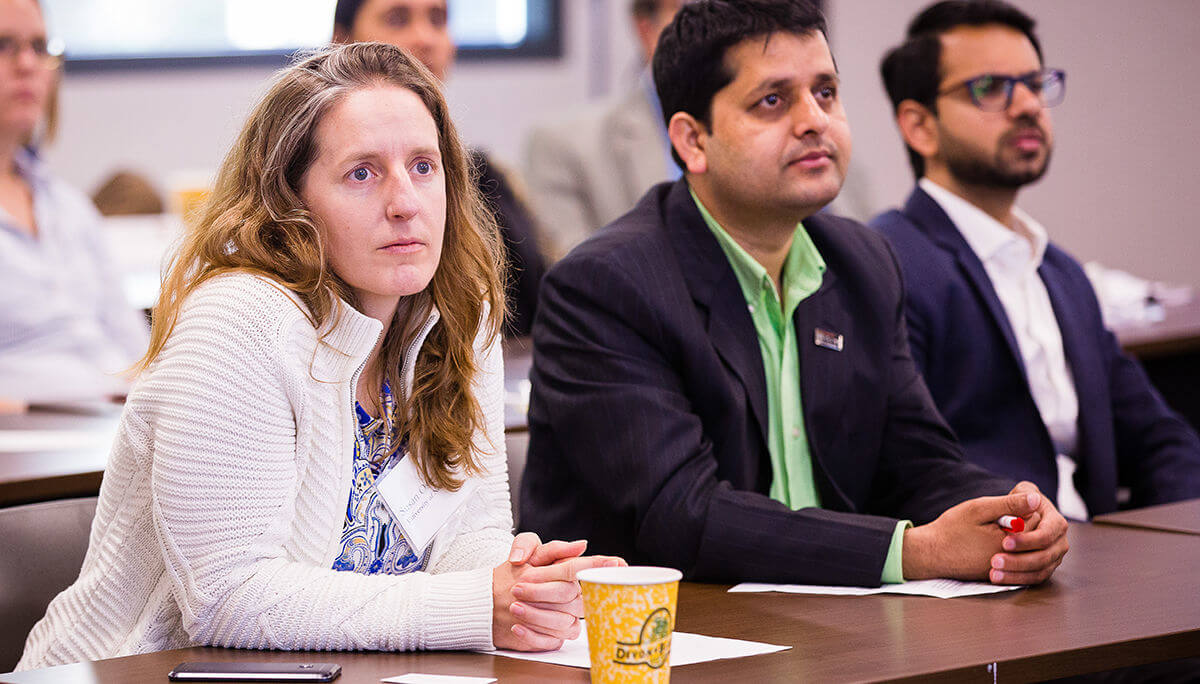 One panel focused on the Rohingya crisis that has led to 1.2 million members of the (Muslim) Rohingya community of Myanmar to seek refuge in neighboring Bangladesh. Oka, a research associate professor of global affairs and anthropology, described the historical roots of the current conflict and the process of “scapegoating” of the Rohingya community that has been seen in other settings, including Congo, Rwanda, Kenya, and 20th century Europe.

The gradual process of stripping the Rohingya of their rights and citizenship was also described by Mahbub Hassan Saleh, deputy mission chief at the Bangladesh Embassy. He emphasized that the issue was not a bilateral issue between Myanmar and Bangladesh, but an issue of international concern, especially after the United Nations recommended the prosecution of Myanmar military officials for genocide and crimes against humanity. 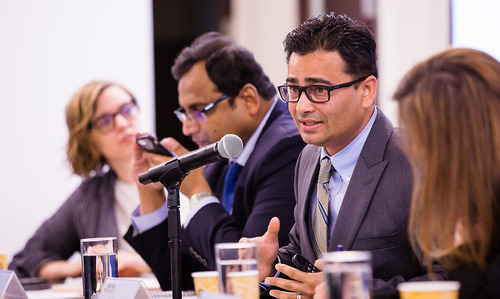 Joshi, research associate professor with the Peace Accords Matrix project at Notre Dame’s Kroc Institute for International Peace Studies, emphasized that any sustainable solution to the crisis must address the root cause, namely the widespread and long-running conflict in Myanmar involving the government forces and 23 different armed groups.

The panel was moderated by Kowalski, assistant professor of global affairs.

The second panel, moderated by Iyer, began with the conference organizer Ostermann, assistant professor of global affairs at Notre Dame, describing the hitherto limited role of religion in Nepal’s elections. However, she cautioned that since the country is home to several religious minorities, this should not be taken for granted, and that rising economic inequalities across religious groups would have to be managed wisely.

Farzana Shaikh of Chatham House described the tussle between traditional political parties and more extremist organizations for the support of the so-called “moderate voter” in Pakistan. While Islamic parties did not obtain a high share of votes in the 2018 national election, this was partially attributable to a large degree of appropriation of the Islamist agenda by mainstream parties. It remains to be seen whether the moderate voter will respond more to religious issues or issues related to development outcomes and the provision of public services. 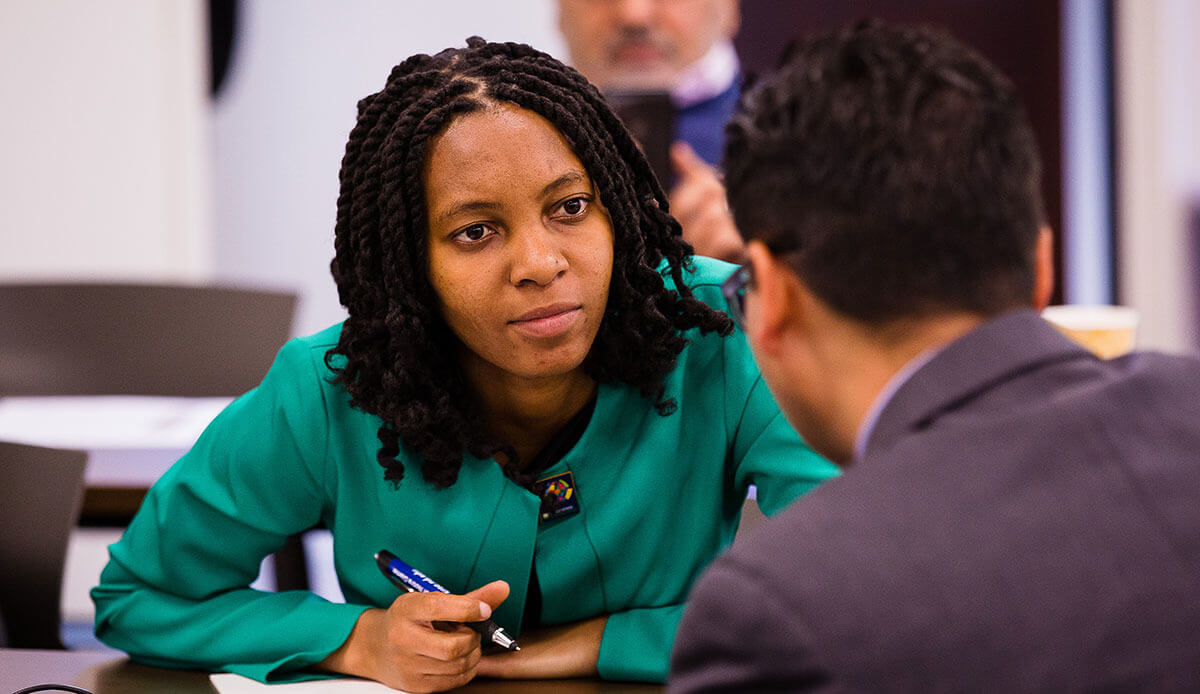 Originally published by Liu Institute at asia.nd.edu on June 04, 2019.